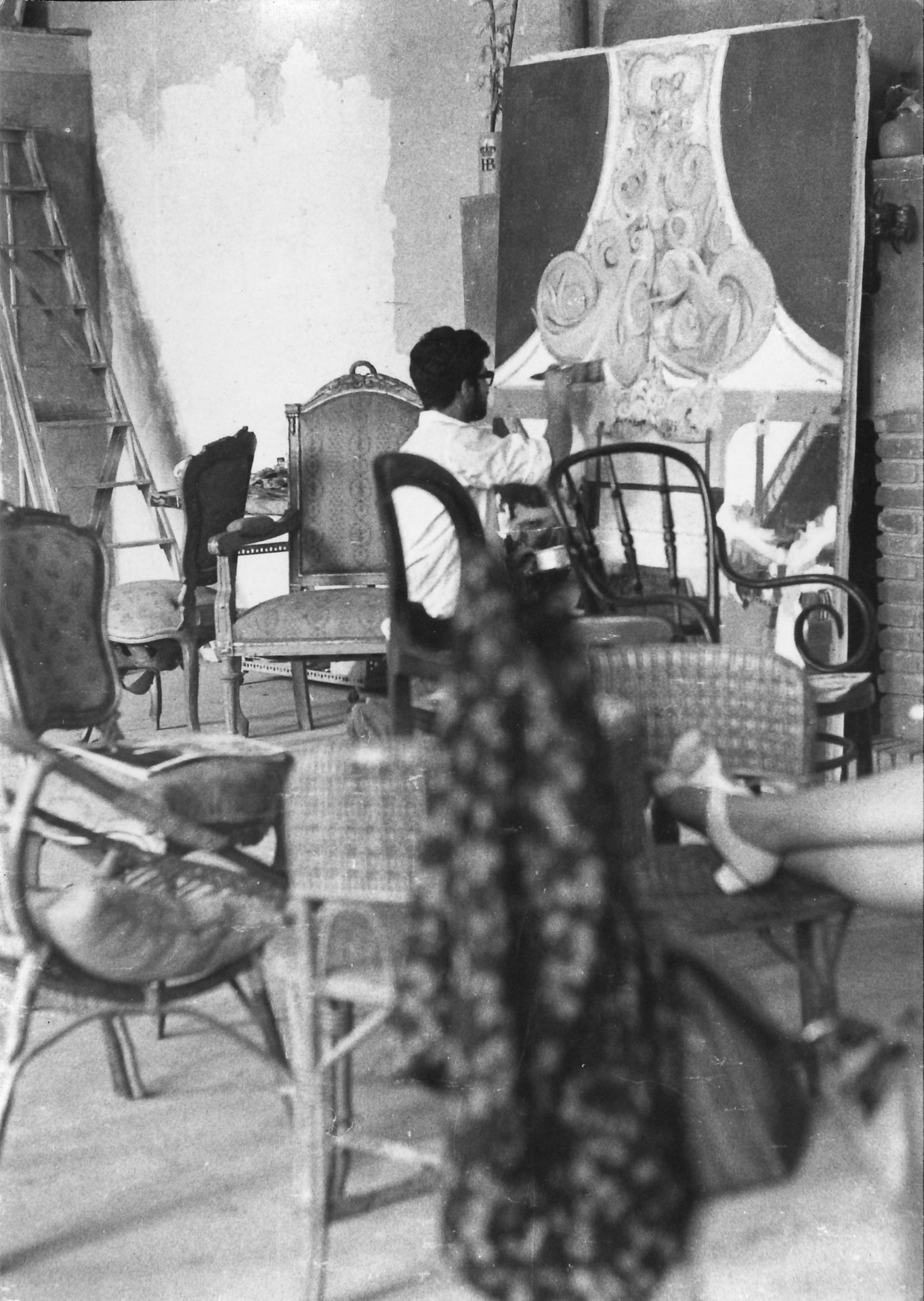 Francesc Artigau at his workshop (1966)

In 2004 , the Museu d’Art de Girona offered an early, almost pioneering consideration of Catalan artists and their works th at were in keeping with the Pop aesthetic and new realisms of the 1960s and 70s. The Legacy of Pop Art in Catalo nia, the exhi bition curated by Antoni Alvarez de Arana , featured some 60 works of design, painting, sculpture and comic and installation art, a selection that, while not exhaustive , was broadly representati ve of Catalan
Pop Art and which included two works by Francese Artigau that are now returning to Girona. In the catalogue of the 2004 exhibition, mention was made of the limited attention paid on the exhibition circuit to these expressions of art that presented colourful , ground-breaking , critical visions of reality and which shared the aesthetic of international Pop Art. Years later there still remains much to be done. The list of exhi bitions and reviews of the 1960s and 70s demonstrates too close a focus on readings of abstractions and realisms, trends in art presented as touchstones of the time.

Consequentl y, when the Museu d’Art de Girona received a proposal to devote an exhibition to the work of Francese Artigau, presented by the art historian Sergi Plans, and now the show’s curator , we thre w ourselves into it wholeheartedly. Firstly , because it was consistent with one of the lines of exhibitions mounted by the Museu d’Art, namely to revive and review Catalan movements and artists that have not always been able to find display spaces in recent times. The sixties , seventies and eighties are the epitome of this, as they have, until now, been repeatedly neglected in many museums’ exhibitions and acquisition policies. And secondly , because it provided a chance for the Museu d’Art to fulfil its wish to go beyond the discourse of its permanent exhibition and position itself as a museum of modern and contemporary art in Girona. Moreover, in this particular case, because it connected with that first exhibition which, years earlier, had already espoused trends out on the distant fringes of mainstream interest. In addition, it offered a unique opportunity to present a review of a key period in an artist ‘s life and career in the company of that same artist.

We decided from the outset of the project not to mount a survey exhibition of Francese Artigau’s art but to concentrate instead on his early days, from that first moment when he took a stance by producing radical work that was critical of the political and social situation in Spain to wards the end of Franco’s dict atorship, the years of developmental ism. The title of the exhibition is a deliberate nod to the historic exhibition held at the Col•legi d’Arquitectes de Catalunya i Balears in June 1 965, Chronicle of Realit y, regarded as a turning point in the art of the day, an initial attempt to communicate life and painting through reality, as it was descr ibed at the time. The exhibition we are presenting now should have opened a year ago to coincide w ith the artist ‘s 80th birthday, but the circumstances of the Covid-19 pandemic forced us to postpone it. As a result, it seemed to us that the best thing to do was to
mount it a year after the global standstill and forced confinement. Even though we are onl y just emerging tentatively from the Covid impasse , we are convinced that the bright colours of Artigau ‘s works will cheer our eyes. In addition, we can confidently say that his biting observation of society as it was back then, the subterfuges employed to circumvent the lack of freedom of expression, his condemnation of the alienation caused by the media and the consequences of consumerism and its impact on the environment will reveal that little has changed in the intervening 50 years and more. The differences between the rich and poor continue to grow, censorship and consumerism are still rife, the mass media and now the new social media play an overwhelming role, and the environmental crisis has become unstoppable. And just like then-perhaps even more so now-there is a need for critical gazes expressed through culture. Artigau. Chronicles ofa Reality, 1965-1977, the exhibition we present today, covered in depth in this accompanying catalogue, takes us back to the 1960s and 70s, which do not seem that long ago. Today, we too need the colours of Pop to escape from this darkness of isolation; we need them to help us laugh at what we have just seen; but above all we need artists who, as then, will hold up a mirror and question reality, which remains bleak, albeit with touches of bright colours .

I would like to acknowledge all the people who have participated in this endeavour, one typical of every exhibition project. I would like to thank all the lenders, public and private, for their generosity; the designers and technical staff who have made the production viable with their professionalism; and the entire team of the Museu d’Art for their dedication to the task, in particular the people responsible for producing the exhibition, Aurelia Carbonell, Mar de Prada and, more recently, Roser Aspar6. Above all I would like to express my gratitude to Sergi Plans, the curator and driving force of the exhibition, for his proposal and for his commitment and devotion, and to Francese Artigau for his enthusiasm, generosity and tremendous willingness to open his doors and invite us into his studio so that we might comb through his work and choose from it at will. We are indebted to him for this visual return journey though his-and our-reality, the circumstances back then and those of today. 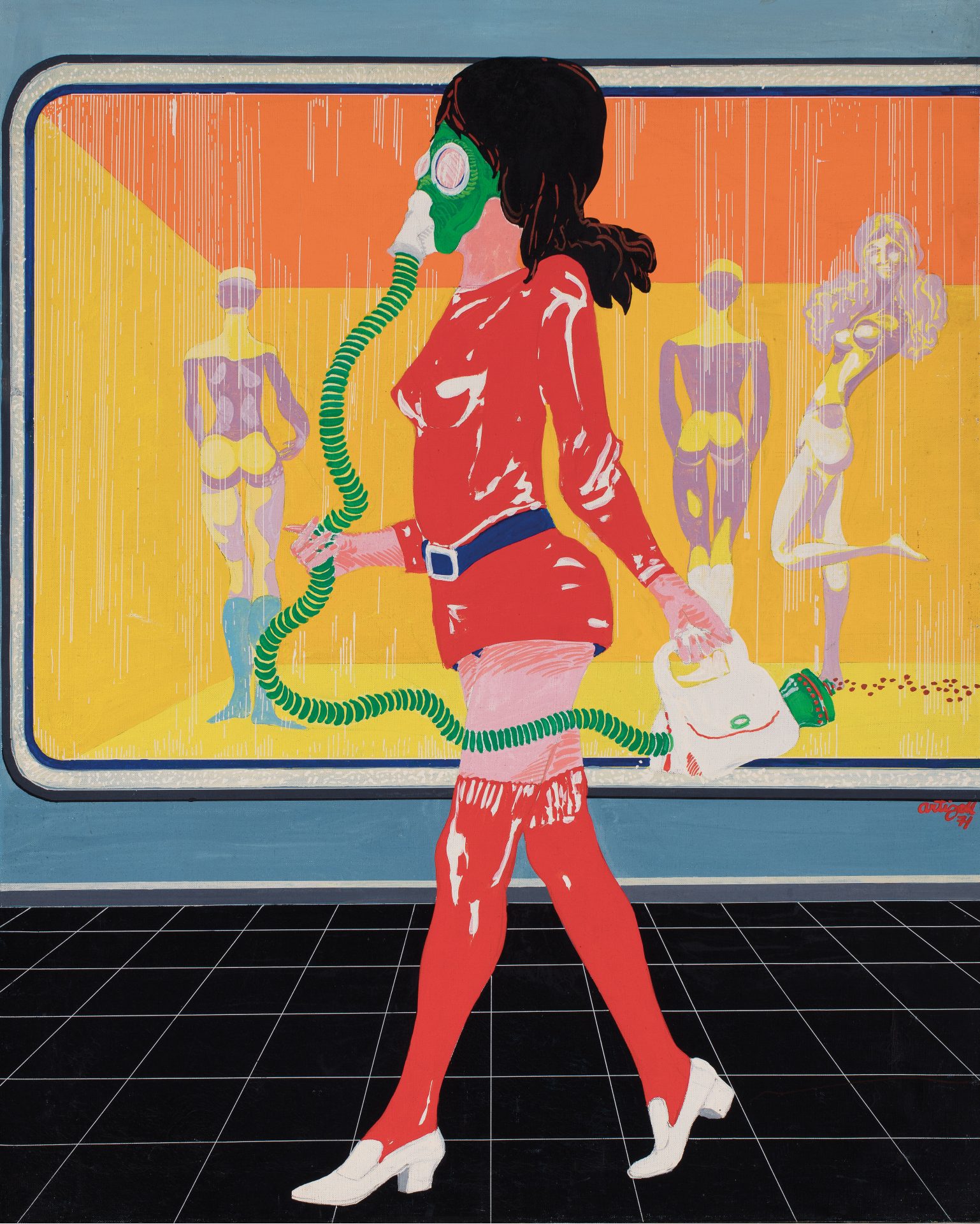 Francesc Artigau (Barcelona, ​​1940) is one of the greatest representatives in Catalonia of the new figuration that, in the mid-sixties, challenges the hegemony of informalism, which had been capitalized by the propaganda of the Franco government as a symbol of a Spanish modernity integrated in the international tendencies. With a figuration that takes up the everyday environment and the immediate reality as a source of inspiration, he develops a painting often marked by social and political denunciation, and the critique of the incipient consumer society of that late Francoist Spain that, after the gray years of the postwar period, had been just gotten up to the economic well-being with the developmentalism, but it continued lacking the basic principles of freedom.

Artigau focuses his attention on the new oligarchies that sustain and at the same time benefit from the regime, the new idols that have emerged from the mass media, contemporary international events – such as the French May uprisings -, the problem of man in the society of the spectacle and its alienation or the impact of waste on the environment, among other issues. Issues that, in many cases, remain fully valid.

As Rafael Santos Torroella rightly said from his tribune in El Noticiero Universal, on the occasion of the artist’s second solo exhibition at the René Metras Gallery in 1969, “Artigau could be placed among the socially proliferating painters today. But he is more of an ironic chronicler than a pamphleteer ”(October 22, 1969). The exhibition “Artigau. Chronicles of a reality, 1965-1977 »reviews the first stage of a prolific career of more than fifty years, the period between his first exhibition in a commercial gallery, in 1965, and the first democratic elections in the State Spanish, in 1977. This fact marks a turning point in the effervescence of militant culture during the process of democratic restitution, at which point Artigau, after gradually abandoning the use of mass media images, returns to the drawing notebooks and resumes the painting of the natural, and gives way to a less committed and incisive work, more hedonistic, with a clear predominance of drawing and color.

The exhibition is complemented by the edition of a bilingual catalogue (Catalan-English), which has a presentation by Carme Clusellas, director of the Girona Art Museum; and articles by Sergi Plans, curator; Manuel Vázquez Montalbán, Julià Guillamon and Mar Saiz.

The catalogue includes the artworks on display as well as the list of exhibitions by Francesc Artigau during the period 1963-1977. Available for sale in the shop of the Art Museum and also online in the bookshop of the Generalitat de Catalunya.