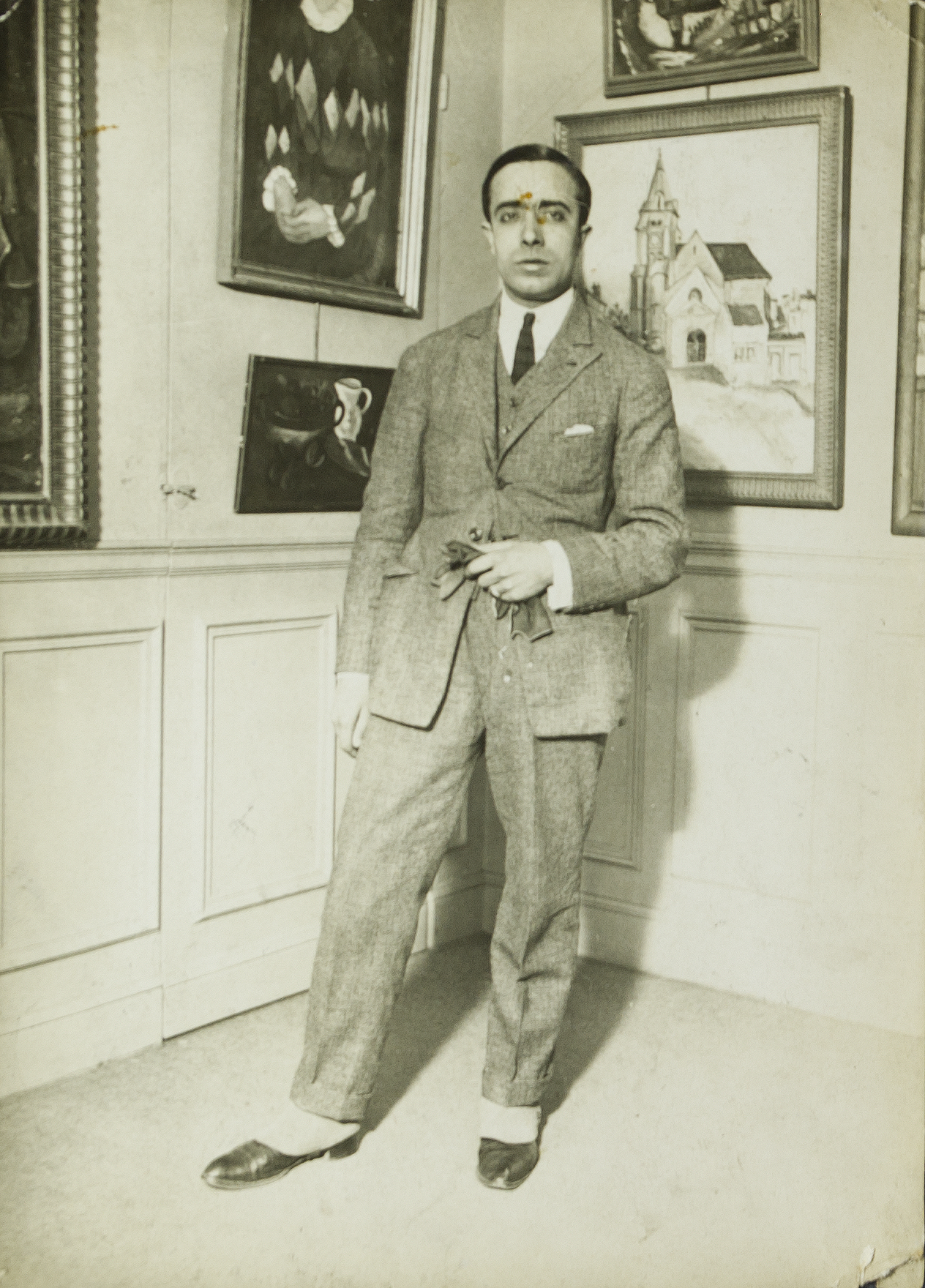 Unknown author. Celso Lagar photographed at the Galerie Percier (Paris) on the occasion of the joint exhibition held in 1923. Celso Lagar Archive

This exhibition we present is the first attempt to survey the life and work of the painter from the province of Salamanca Celso Lagar Arroyo (Ciudad Rodrigo, 1891 – Seville, 1966) at a key moment in his career, the period he spent in Catalonia spanning from 1915 to 1918. Over the course of these years (when, as we shall see, he also spent time in Paris, Madrid, Galicia and Bilbao), Lagar had four exhibitions at the Galeries Dalmau and the Galeries Laietanes in Barcelona and one at the Sala Athenea in Girona; he showed work in a number of group exhibitions; and he participated actively in the artistic movements developing in Catalonia, positioning himself in the orbit of the avant-garde with his creation of an ism of his own, Planism, while maintaining an ambiguous proximity to Noucentisme. Despite this intense activity, he has never been included fully in any of the accounts of Catalan art of the time, and when he is mentioned, it is usually as a peripheral figure, a passer-by, gone in little more than a fleeting moment. This exhibition, in contrast, is based on the thesis that not only were the years Lagar spent in Catalonia extremely important to his own development but that he too was a significant figure on the art scene in the country.

It would be neither fair nor accurate to regard Celso Lagar as an unknown artist in the history of Spanish art of the twentieth century, and even among the European interwar avant-garde moments and what has come to be known, more or less correctly, as the School of Paris. His work is held in some of the most important museums and collections in the country and has been the subject of academic study and a number of major monographic exhibitions and publications. Even so, we must also point out that no museum has ever mounted a survey exhibition of his output, that there is still no catalogue raisonné of his work and there are numerous aspects of his life and work that remain unclear or poorly explained, since a series of erroneous details about him that began to circulate some years back are still all too often repeated. His life’s journey means that many of his works are scattered among Catalan, Spanish, French and British collections, most of them private and difficult to gain access to, and hence his oeuvre remains largely unknown. The fact that he himself very often did not take the trouble to date his pieces make it very difficult to adequately contextualise some of his most important works. It is unsurprising, given all these factors, that there are a certain number of works circulating on the market attributed to Lagar that are manifestly not his, as a result of which studying him is rendered more complicated and his true aesthetic value is underappreciated.

If this is the situation in Lagar’s case, far more complicated still is that of the woman who became his wife and artistic partner, the French sculptress Hortense Bégué (Caubous, 1890 – Paris, 1957). Even though Lagar and Bégué met in 1913 and were inseparable thereafter, and despite the fact that they showed work together on several occasions, she has been largely ignored apart from just the odd mention in studies on Lagar. Indeed, there is no study or academic research whatsoever about her. Given that Bégué shared with Lagar his time in Catalonia and Girona, we regarded it from the outset as essential to present her too in this exhibition, the first to feature a selection of her work retrospectively, and in its accompanying catalogue, which includes the first monographic study about her. 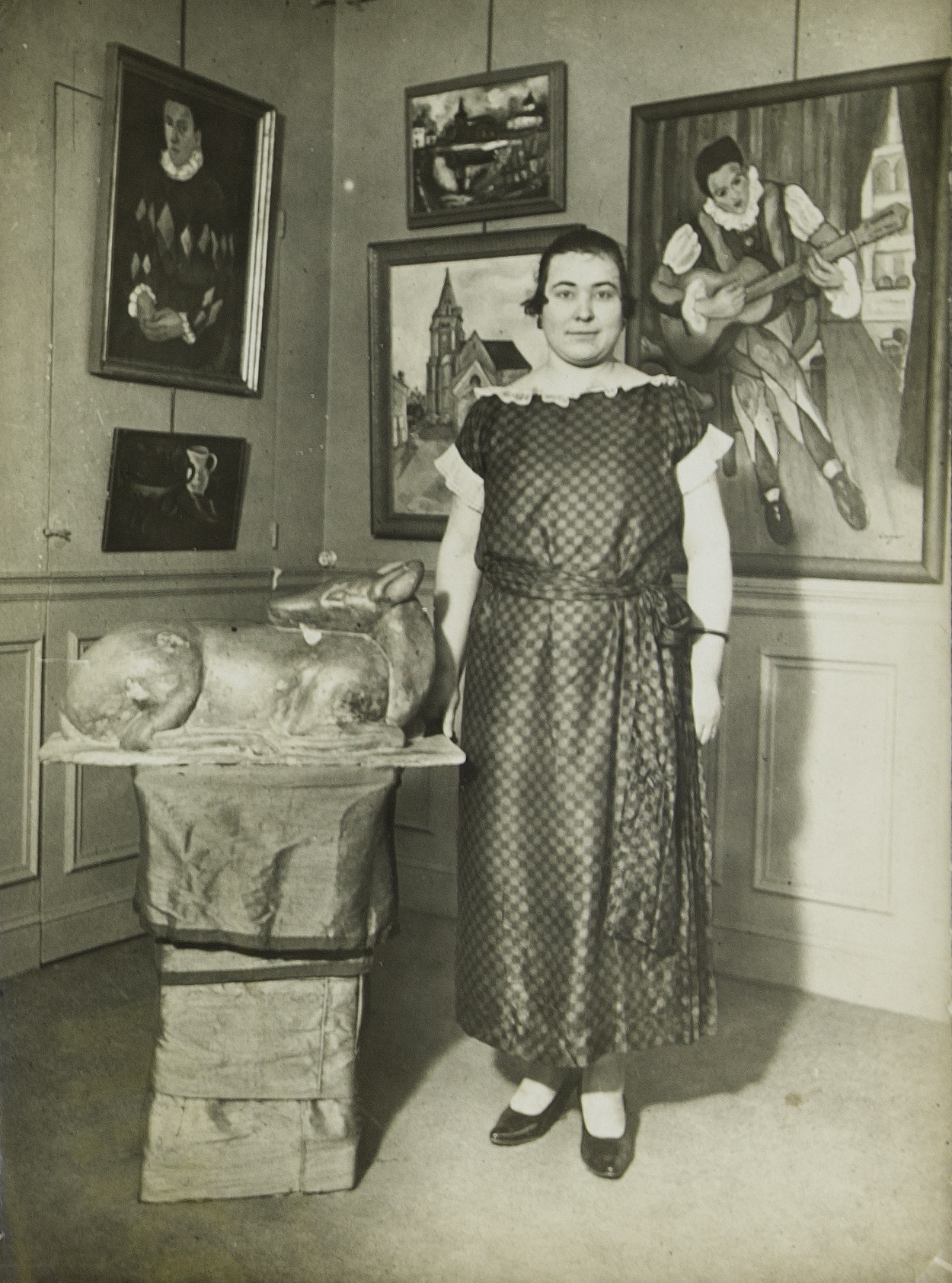 Unknown author. Hortense Bégué photographed at the Galerie Percier (Paris) on the occasion of the joint exhibition held in 1923. Celso Lagar Archive

We have focused our research, then, on the years that Lagar and Bégué spent in the main in Catalonia apart from a few trips they made elsewhere, in other words the period from early 1915 to late 1918, as we believe that their time in Catalonia was central to this interesting and productive time in their lives, in which they interacted in diverse ways with the Catalan and Spanish art scene; so important, in fact, that we have taken the liberty of calling this period their ‘Catalan years’. We have opted to include works made by Lagar over the course of these years regardless of where they painted, in part because it is impossible to situate them more precisely, but above all because we regard them as belonging to a creative continuum. In order to document his creative process, the exhibition features a number of works created during his time in Paris prior to his arrival in Barcelona, and closes in 1919, when he left the Iberian Peninsula almost never to return. With regard to Bégué’s work, however, we have decided against using the same timeframe. As very little is known about her life and work, and given that we have found only a few examples of her art, we have chosen to present all of them, regardless of when and where they were created.

It should be noted that both Lagar and Bégué remained active until shortly before Bégué died in 1957, at which point Lagar’s health began to fail severely and he gave up working. This means that in quantitative terms this exhibition excludes most of their artistic career, the time they spent mainly in Paris from 1919 onwards, with spells in Collioure and Brittany, which they visited often after 1927. Lagar’s work from the twenties and thirties, focused above all on the world of the circus and on stallholders and also on landscapes is his best known internationally. Despite the interesting nature and importance of this period, our project has very specific boundaries and objectives and hence we have not included any works from it. We hope that the research around Lagar and Bégué will contribute to expanding our knowledge of both of them as artists and individuals, though we are very aware of the considerable number of hypotheses awaiting confirmation and of the information we still lack to be able to paint a more exact portrait of their careers. We also hope that our endeavours will add further detail to the account of this fascinating period in the history of art and culture in our country.

The catalogue includes all the artworks on display.

Available for sale in the store of the Art Museum and also online in the bookstore of the Generalitat de Catalunya.